Hi all. It’s time to turn your attention to the United Kingdom today, to the delightful University town which is Cambridge. I was there a couple of years back now. I swept in by train in the morning from London and headed northwards in the afternoon to Sheffield where I was staying the night. From London – King’s Cross – it is a 48-minute direct train trip so as a day trip it’s not far to travel and works really well.

And when you arrive, you really are in a beautiful place, a place very unlike London too. It’s green and has a number of waterways including the river Cam. It’s an exceptional destination, and when the weather is warm it’s just absolutely delightful.

As a university town, it is home to, no surprise, many universities. And visiting many of them is possibly depending on the day and what is happening at the time. There are many grounds to walk, historic buildings, libraries and chapels. There’s a little bit of Hogwarts about some of the universities too, and you’ll find that many well known Brits who received an education received it at one of the universities – or should I say one of the colleges – from Douglas Adams to most of the Monty Python crew. It is here, obviously, that the theatre/comedy group the Cambridge Footlights came from and is based in Cambridge – which boasts such alumni as many of the Monty Python crew and The Goodies for starts – Olivia Coleman, Emma Thompson and Stephen Fry are other notables.

For me, I was introduced to Cambridge via Doctor Who I guess, the story ‘Shada’ (1979) was filmed there. And the place was just as beautiful as it was appearing on film. Tom Baker and Lalla Ward punted their way down the River Cam in a couple of memorable sequences, and we see Tom Baker (Doctor Who) riding a bicycle around the streets and lanes of Cambridge, being chased by a floating ball looking to absorb the Doctor’s mind. 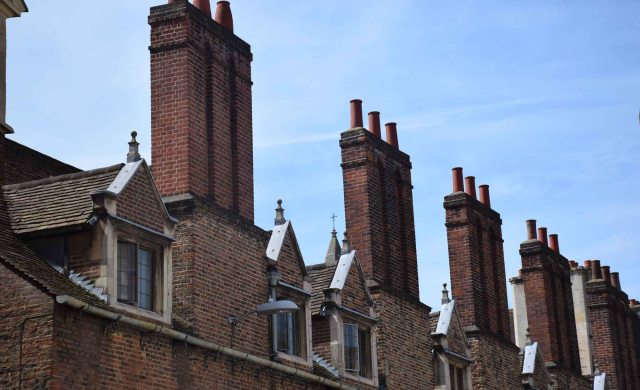 And so both of these activities are popular things to do in Cambridge today. Well, minus the floating ball obviously (unless you apply some CGI to your photos and footage I guess). Taking some sort of boat trip is probably a great thing to do. I was by myself in Cambridge so I didn’t opt to do it, but many did that I saw. The canals and the river Cam wind around and take you past colleges and spots, under adorable bridges. I think it would be quite romantic personally for a couple, pleasant probably in a small group or group of one, but some were bigger groups on longer boats and then I was not so sure.

What really grabbed me in Cambridge was this area sort of behind the colleges and town, called, thoughtfully, the ‘Backs’. It’s grass and grass with the odd tree, it looks like a wonderful spot to spend summer days playing sport or just having a picnic. With the historic buildings of the likes of King’s and Clare College as a backdrop, waterways and the feeling that suddenly you are in the countryside, it’s really delightful. There are also so many beautiful willow trees on the Backs (and elsewhere around town you may spot one too).

The centre of town has a square called the ‘Cambridge Market Square’ and there were many stalls open selling food, nick-knacks, clothes and the like. Plenty of cafes and spots for lunch too if you’re doing a day trip, I found a nice little underground burger bar when I was there and I should tell you – I don’t recall seeing a single fast food chain in Cambridge. Very refreshing indeed! (edit: Just been looking at Cambridge on Google Maps and there is at least a McDonald’s and a Pizza Hut sadly)

As for the colleges, you will want to poke your nose into one or two for sure. I started with Emmanuel College, it was the scene of many shots for the Doctor Who tale I mentioned and is undoubtedly a very attractive place with a lovey courtyard and chapel, although it is one of the smaller of the colleges in Cambridge. It was one of the first I saw as I came down St Andrew’s street from the bus that took passengers from the train station to town.

King’s College is the other one I went inside. The library has a lot of very old books and is rather special, and I think King’s is one of the largest if not THE largest colleges in Cambridge. The grounds and buildings were extensive, and the buildings really stunning. Unfortunately no photos allowed in the library. Trinity College was also very interesting –  Inside were a number of statues to alumni including Sir Frances Bacon and Alfred Tennyson which are just inside the chapel. You feel right out of time at times in Cambridge.

Elsewhere there are a number of churches and indeed museums. I tried for the Fitzwilliam Museum but it was closed at the time I went. But honestly just wandering the streets and alleyways, soaking up the atmosphere and admiring the architecture is all you need to really appreciate going to Cambridge.

So I’d spent a few hours there and left. Would I go back? Without a doubt. And I’d stay a few nights, maybe more it wouldn’t be a bad place to wile away a few days or even a week. I could compare it to Oxford of course, it’s smaller and quieter. I preferred it all in all, not that I didn’t like Oxford which is busier and has the place where they shot some Harry Potter. But for me, I could see Cambridge working in reverse one day – staying in Cambridge and making day trips to London.